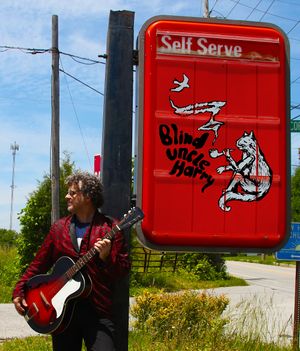 Hi Harry, welcome to VENTS! How have you been?

Great! Thanks for having me!

Can you talk to us more about your latest single “Hillbilly Hippie Haiku Heaven”? Did any event in particular inspire you to write this song?

I grew up in Ft Wayne Indiana, a very conservative place known as the city of churches. From about the age of five I couldn’t wait to get the hell out of there- it’s the “armpit of the christian right” in the song. In contrast Bloomington is an oasis of tolerance and acceptance, and as soon as I moved there to go to college “I knew that I was gonna be all right”. I tried to list everything that the people I grew up with were against, and that I was for while still being funny.

How was the filming process and experience behind the video?

It was so much fun! We had a blast! The cue card opening was filmed in an alley just off the square in Bloomington and was (obviously) a take on Dylan’s Subterranean Homesick Blues. The convertible dance sequence was in my beloved beat up old Chrysler Sebring, and most of the other scenes like the kitchen hoedown were at Tecumseh House (my place), aka Blind Uncle Harry HQ. Apart from editing, I didn’t spend anything to make it.

The single comes off your new album The Gospel According To Blind Uncle Harry – what’s the story behind the title?

Ha! Great question! I take on a mock preacher persona when I play live, and exhort the crowd to bathe in the redemptive power of rock and roll to cure whatever’s ailing them. It’s very gratifying to have the crowd respond to “Can I get an amen! Can I get a hallelujah!” after I’ve just bashed the shit out of mainstream American values.

How was the recording and writing process?

I’m truly blessed to have so many great musicians to work with. We spent a lot of time on the harmonies and vocal hooks. Most of the songs had already been honed playing live, especially the bluegrass tunes, and most of the album was recorded live at Tecumseh House.

What role does Bloomington play in your music?

I’d written a few songs but was way too insecure to perform live. When I moved back to Bloomington a few years ago, it was like heaven- a musical community that was not only tolerant, welcoming and inclusive, but also openly embraced me. Hillbilly Hippie Haiku Heaven is my love song to Bloomington.

What aspect of politics and religion did you get to explore on this record?

Obviously I’m not a fan, to put it mildly, of conservative christian America. And while I really don’t give a shit if I offend someone, I still have an obligation as an artist to get my message across. I do my best to use humor to accomplish that. I’ve gotten some good ol’ boy rednecks to crack up to ‘Uh Oh- Sounds like Somebody Pissed Off Jesus’, and especially ‘Indiana’: “Of all the 50 states/ We’re the one that always rates/ Dumbest fattest and least likely to fornicate”. I’ve also had some threaten to beat the shit out of me.

Where else did you find the inspiration for the songs and lyrics?

Well, the love gone wrong songs were alas based on personal experience. Like ‘Emma Lynn’: “She said to please, please take of yourself/ She said to go be beautiful/ But for someone else.” ‘Strip mining My Heart’ was written by my brother Rick, who we lost tragically a few years back. So there’s some heartache and sorrow mixed in there.

Any plans to hit the road?

I’m so itching to hit the road! I spent all winter converting a school bus into a touring machine, and am now stuck because of the Covid 19 pandemic. Which is a small price to pay compared to all the people dying.

What else is happening next in Blind Uncle Harry’s world?

I’ve got two new finished albums, Courage to Love and Meth Bible Camp road, that we will be releasing over the coming year. Stay tuned!